Bet you can't guess which is both the most pressing, and the least prepared ... sigh. But then on the other hand lets ignore all that and post a couple of pics.

See! I can get my priorities right.

The first relates to the the last piece of work ever commissioned by Games Workshop from me, which through a long and protracted argument about the fee resulted in it all ending with a phone call from the owner [?] managing director [at the time... no idea if that still applies ... it was so long ago] who decided, as I would not agree to what they wanted, I would never work for them again and so it has been.
This all made more amusing in a cynical sort of way by two letters from Games Workshop just recently. Apparently, according to the nice letter sent, which was quit complimentary about my work for Games Workshop, they had 'lost' contract copies of my signing over the rights to my work and they'd like me now to re-affirm the rights by completing a draft document sent by separate letter.

I have not replied to either letter, especially as when I originally did the work I never signed over rights to my work in the first place, and this goes back to the 'Warlock' and 'Doctor Who' games they produced.

Anyway here is the piece ... with apologies for the picture quality. 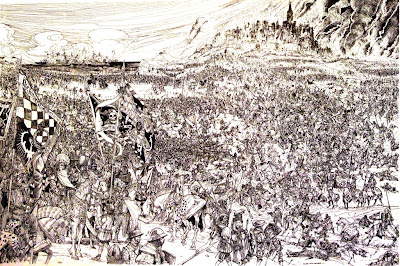 So what was the disagreement about? Well, it was along time ago [over twenty years at least] and I can only put my version of things.

The original brief was basically for a huge complex double page battle scene and the fee was £200. But although the fee was not much I wanted to produce a scene as complex and as large as I could. So I drew the original A2 [approximately] in size and sent it off. A few days later I received a phone call from somebody at Games workshop telling me in effect they loved the piece but felt only the left side was what they wanted, and I said, 'fine, not a problem'.


I was then told, 'But because we want to only use the left side we will only pay you £100.' My reply in effect went as follows. 'That's ok, but you cannot use the right side as well.' To which I was informed that, 'no, they could use the right side as well'. I pointed out that the fee was then being reduced by half and I could not accept that, but I would accept the half fee offered but only for the use of the left side. So, in my opinion, if Games Workshop wanted to use both halves [that is the full picture] then they should pay me the full fee agreed, to which the reply was, 'no, as they only wanted to use the right side of the picture'. Thus the argument started, which resulted in several phone calls from a variety of senior members of staff until it reached, as I've 'said' the 'top'.

So, there you have my two-pennies worth. I'd put a lot of time into this picture, even trying to match the regiments involved to Game Shop figures offered at the time. But felt, though I did not object to them apparently not liking the left side of the picture I drew, I was not going to allow the to 'use' of any, or all, of that right part without payment. What you all think of the matter I do not know, and I it would not surprise me if GW have a different take on events, but as said, this is my story.

But what of 'the horror of it all'?

Well, besides doing fantasy and science fiction work I have lesser known reputation for horror, and although elements crop up my liking for Ghost and Horror stories is rarely allowed to flourish. I'm not really into the slasher work especially of films like 'Saw' et al, but occasionally a story is offered where I can indulge my 'Grand Guignol' ways. Though rare as I do suffer nightmares [laugh ... or should that be cackle!].

Anyway Micah Nathan, American author asked me to contribute an illustration for his latest book, 'Jack the Bastard', which I was pleased to do and here it is. 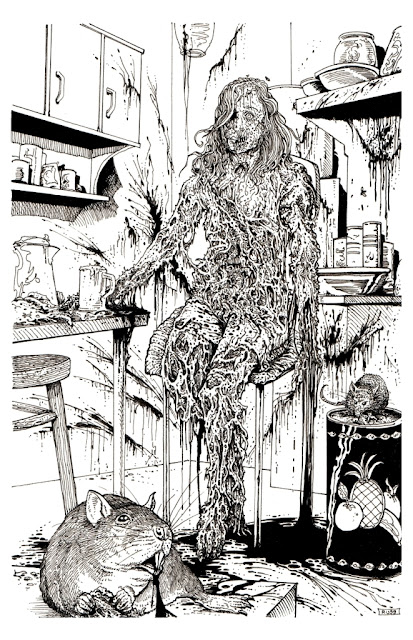 For those interested check out the book, Nathan can be found at:
http://micahnathan.com/

So there you have it. So what's in the pipeline? Well a record cover [in the planning stage but well under way] and some work for 'Runequest', which is in the thinking stage. Till the next time, keep well you readers of mine.