The last post [ a bigger picture] raised some interesting questions - I've replied to a couple through comments, but also realise I can chat a bit more about types of drawing media [even show a couple of examples immediately to hand - though not all would be fantasy related, or a little more experimental] at a later date, and if their is interest.

In the interim, I'd like to post a couple of examples of maps. Not necessarily the best, but they were fun to do, as one of the elements of illustrating for me is trying to envisage a, for lack of a better term at the moment, 'bigger picture'. So here are some examples; first from the Fabled Lands series designed by Dave Morris and Jamie Thomson. 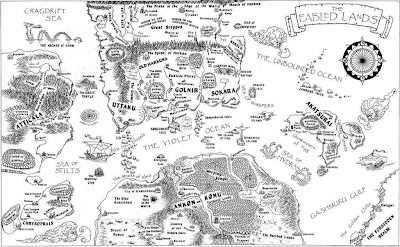 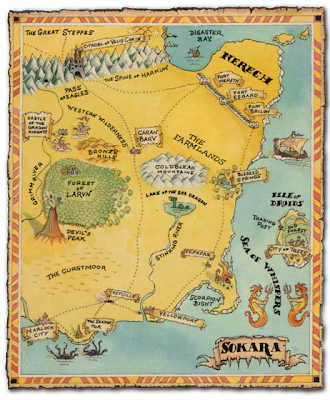 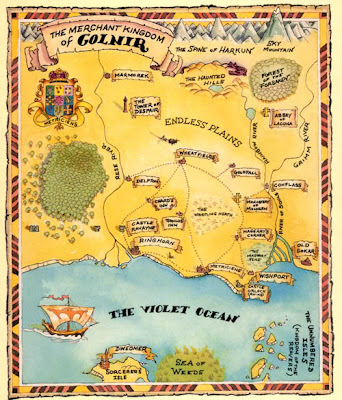 At this point, I had another map to post that showed an actual small town in England , but now realise that the only scan I can raise [at present] is actually tiny - thus the best laid plans of mice and beasties.
Still, as we are 'looking' at Fabled Lands, let's look at some images from that series, where I tried [as was the intent] of visually showing the Land in all it's variety and diversity. 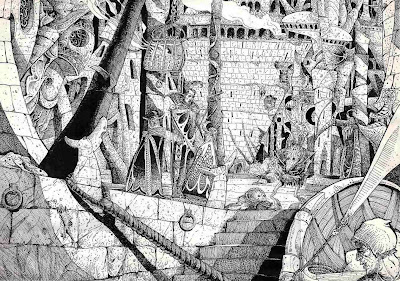 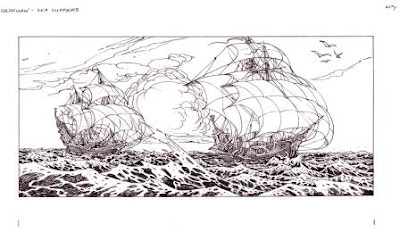 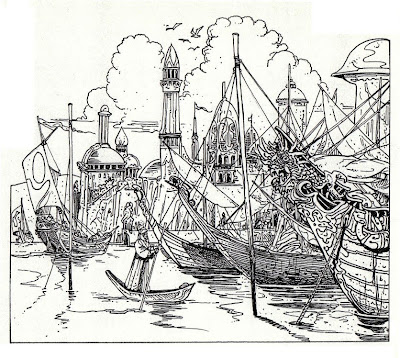 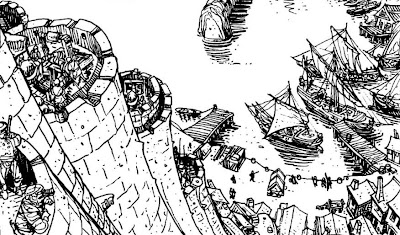 I did a similar task with a world that was to be called 'Abraxis' , with it I created a map, cities, peoples, creatures, and so on; it never saw the light of print, and only my 'sketch studies' were ever 'finished', but again if anyone asks, they'll be a post.
Posted by Russ Nicholson at Friday, May 28, 2010 5 comments:

Email ThisBlogThis!Share to TwitterShare to FacebookShare to Pinterest
Labels: Maps., the Fabled Lands

In response to the comment by Limpey; below is a larger post of the illustration of the 'man in the firelight'. 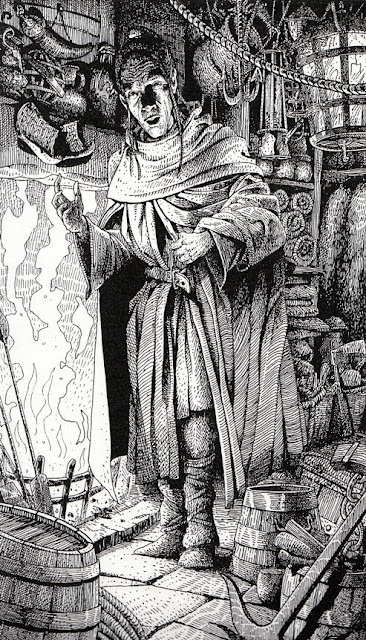 Hope that shows better detail. I'm still learning about 'posting' so please bear with me.
Posted by Russ Nicholson at Sunday, May 23, 2010 9 comments:

Email ThisBlogThis!Share to TwitterShare to FacebookShare to Pinterest
Labels: penwork

Something for the weekend, sir?

So What do do for the weekend? Let's start by saying I do enjoy your comments, I don't just mean because there is a lot of praise [gee, shucks, Gorsh] though it helps me want to post and post, but because much of what you say is interesting - if I don't reply to everything [or everyone] do forgive me. Eventually I intend to add more about myself, but in the meantime, if anyone has direct questions about this or that [that I feel I can answer] then please ask.

But to posting images because that's what this is all about. OK, let me dip into my old files.
These next two were produced for books written by the versatile Dave Morris a few years ago. 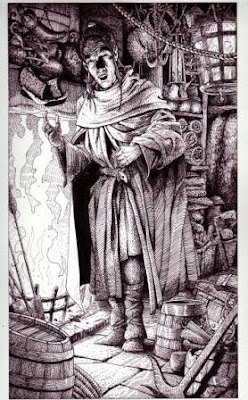 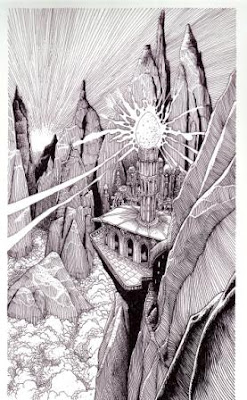 Next are three images from the Goldhawk series, an offshoot of the FF series aimed at  younger readers. 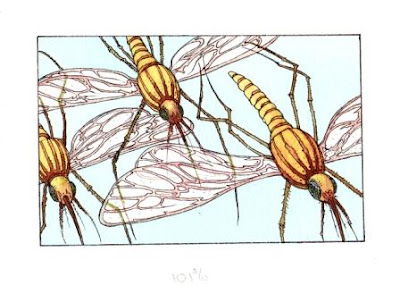 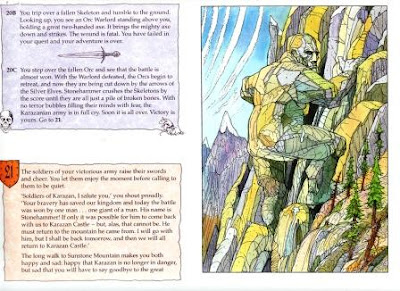 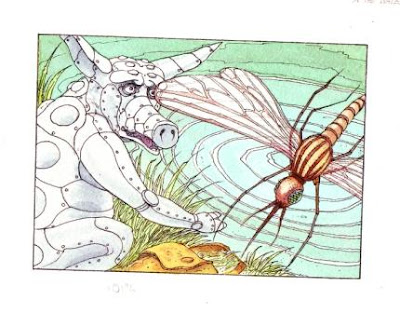 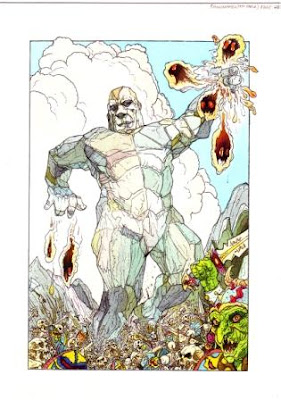 Last for this part of the weekend , another illustration for a ghost story. This proved a difficult story to illustrate but I think it worked. Email ThisBlogThis!Share to TwitterShare to FacebookShare to Pinterest
Labels: Something for the weekend

So, what was going to post last week? Well, I'd recently produced a couple of illustrations for the French magazine/website production Loup Solitaire for Le Grimiore.net.
See below for one of the pictures that I did. 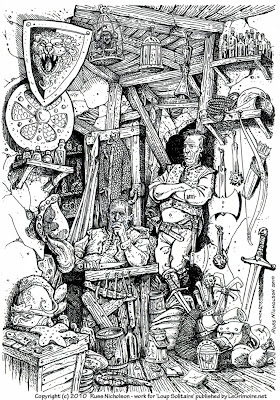 Here are a couple of spot doodles that were done for clearing my mind, as they say, see below. 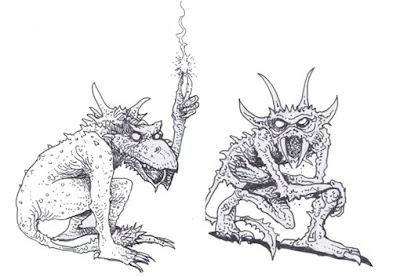 Last today, two illustrations from my work produced for the Fighting Fantasy Series. 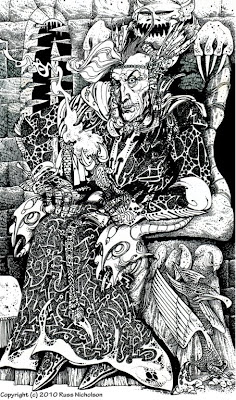 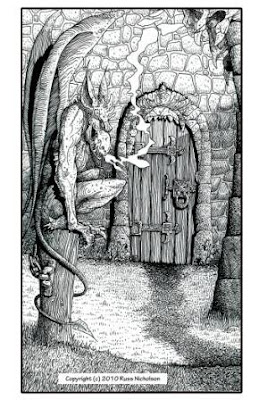 Email ThisBlogThis!Share to TwitterShare to FacebookShare to Pinterest
Labels: le Grimoire
Sorry for 'silence' since last week - I had decided to change broadband provider and the 'smooth' transition promised proved anything but - I tried a friend's machine as a substitute but his keyboard was so worn I found spelling a real problem. Still, at last I've been reconnected and will start posting some more 'bits and pieces' as soon as I can.

I didn't realise I was beginning to have withdrawal symptoms since deprived of access any longer and it might of been like giving up smoking .... no, on second thoughts. It was 'bad' but not that bad.
Posted by Russ Nicholson at Thursday, May 20, 2010 2 comments:

So let's take a step


I'm honoured to see what is happening . Yesterday I had no followers, this morning 34, just before I post this message I have 40. Wow. I feel honoured. So can I say to all - thank you and welcome.

The idea of this blog is to publish some of my bits and pieces - some good, some not so good, some I've done for small publications, and so on, then maybe try to get a website together and look for work. 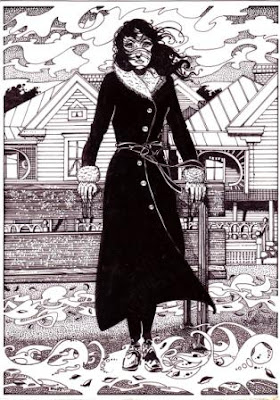 I do have a couple of jobs on the go at the moment but unless the 'owners' give permission they cannot be discussed. 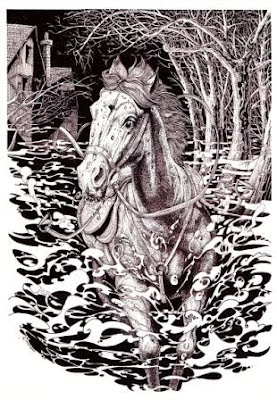 For the moment here are two 'old' illustrations done for small press work. The 'horse' in particular, was done for a publication called 'Ghosts & Scholars' produced by the excellent Rosemary Pardoe and related to the stories of M.R. James.

Email ThisBlogThis!Share to TwitterShare to FacebookShare to Pinterest
Labels: Ghosts and Scholars 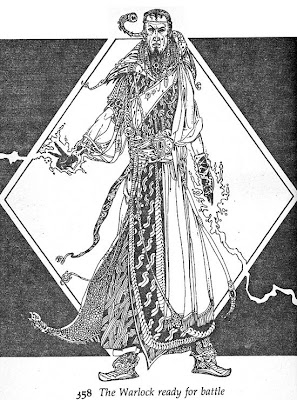 This is a page copy of my illustration for 'The Warlock of Firetop Mountain' showing the Warlock himself.


The longest road is getting started and after many blips .... This is the start.
Haven't a clue what I'm doing, but ..... it's a start, especially after so many nags about why I wasn't online [yet] by several fans of my work. I hope they'll 'drop in'.

So why so long - ERR.... no excuse, other than the obvious, but I hope to begin adding artwork as soon as I can. 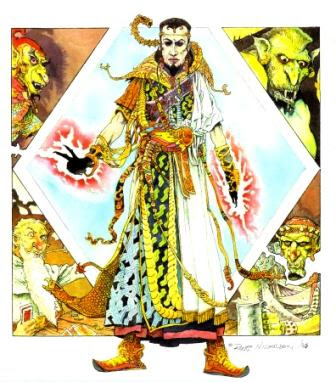 Apologies about the quality of this image, but here we have the Warlock and 'friends'.
This was produced as a request by Puffin Books to be given as a prize in a competition where the book was being launched - never was told what happened to it, or if someone ever did 'win' it.
If anyone does know, please drop us a line.
Posted by Russ Nicholson at Monday, May 10, 2010 16 comments: