I have had a couple of queries over the weeks about giving advice, and one intrepid has sent me a piece to crit. I'm happy to do this [once] as I've a couple of pointers to offer, which might be of help to the artist. But, and here is the Question, do I do it with my next post, or later? Feedback please, including anything you want answered .. this is a one off offer guaranteed to not survive its sell by date.


From the redoubtable Andy a couple more scans of my work. 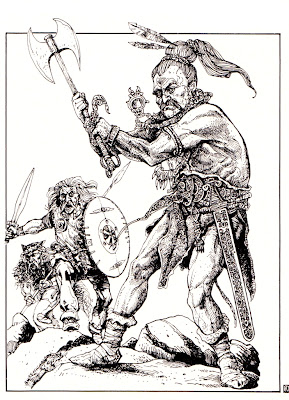 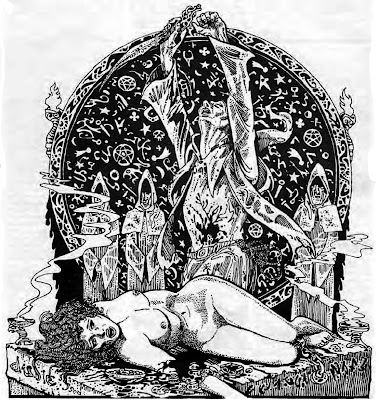 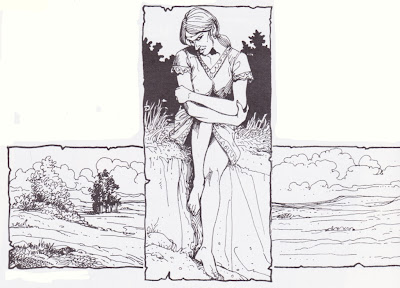 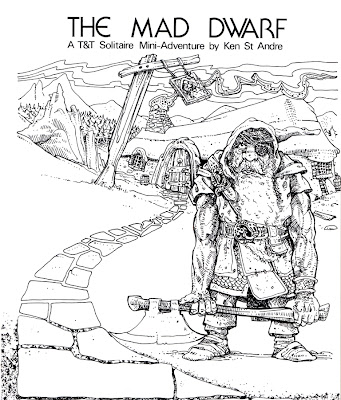 So there we have it for this post ...I'll leave it to the weekend to see what comments or questions, etc. arise and [lol] assume if nothing is forthcoming to hold my crit. Be warned it could be as dry as old toast.
Posted by Russ Nicholson at Wednesday, August 31, 2011 10 comments:

Bits and pieces and some news

I have been happily, health permitting, working on various commissions of late, though the future lies in shadow, when today,I had a nice email from film maker, writer, director, and producer Martin Gooch, of Death Ltd. about progress with his film 'Death'.

You may remember I posted a couple of bits about my involvement before.

Martin would like more people to get involved, especially if they ever dreamed of being linked to a film. Think of drinking champagne at Cannes, for example, as an associate producer .... and plugging your own projects.

As he points out, 'Filmmaking is very hard in this country. The only way you can prove that you are good enough to make a movie - is to make a movie - it's a classic Catch 22.
There is no funding in this country to speak of (especially if you wish to make slightly off the wall movies like this one).
When this film is complete it could open the gateway to a whole future for everyone on the movies in doing the thing we love - making movies.
You will help us actually make a movie. And your immortality will be achieved with you name on the credits.' So for a few pounds [if you have them :)] you can help an inspiring creative finish of his film and get involved into the bargain.
Please check out his link.http://www.sponsume.com/project/death-martin-gooch-movie

As for me, well I see some of my work up on a big screen. As well as some illustrative work for the production, I also contributed to to the films titling. See an examples below.
So, their you have it for now, though apparently there will be a poster that includes work by me too. can't wait to see it.

Maps have also come to the fore of late, so here are a few, done a long time ago, for 'The Fabled Lands'. 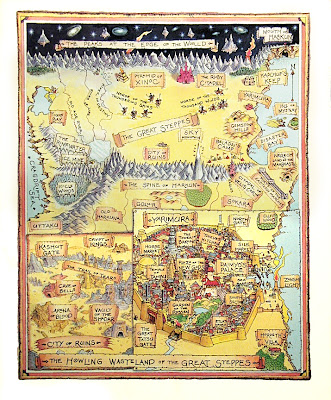 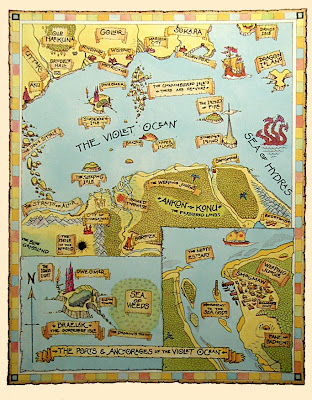 These were found on the web as was the following.
Abraxas, the Lost Continent  has now been put onto Amazon as a game, which can be down loaded via kindle:
http://www.amazon.co.uk/Abraxas-The-Lost-Continent-ebook/dp/B005FZ26MK/ref=sr_1_1?s=digital-text&ie=UTF8&qid=1314463301&sr=1-1

As I have no access to luxuries, [yes, I know that sounds sad], like Kindle, I cannot comment, but if you were [are a fan of The Fabled Lands] and do have kindle, do check it out.

Finally, an oldie from White Dwarf that was linked to a Games Workshop box set. 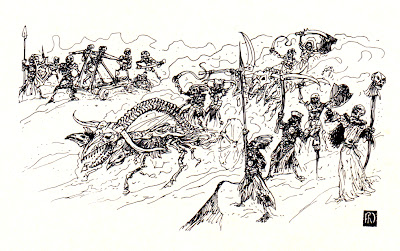 The Void came back ... keep your fingers crossed I can withhold the Shadow.

I had intended to continue my exploration of Space 'things', but have been busy with work [which is nice:)], and getting involved [boy did I wish I'd kept my mouth shut ....well....] about what I thought about the nature of the term 'drawn by' [on Facebook] in reference to something I was once involved in. Of course, my comments were in part due to it being very early morning, I was not really awake, and I failed to put my point across well. lol [Now that's true], and my leg hurt, and a magpie went past, and the clouds darkened, and ...
ah, now, feel sorry for the boy. he he.

Anyway such is the saga of life, or as Andy said, [to paraphrase] 'What is Facebook for but to bitch!', and it's to Andy I have to thank once more for his dedicated scanning of my old work from such as White Dwarf Magazine. So, without further ado, and in no particular order, here are a few from those days of yore. It's amusing to think [see] some of them that I have no memory of, and a few look a tad 'rushed'. 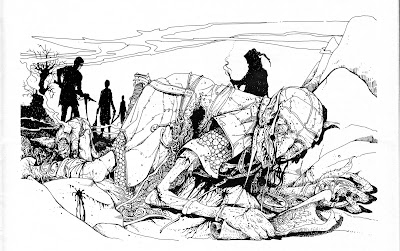 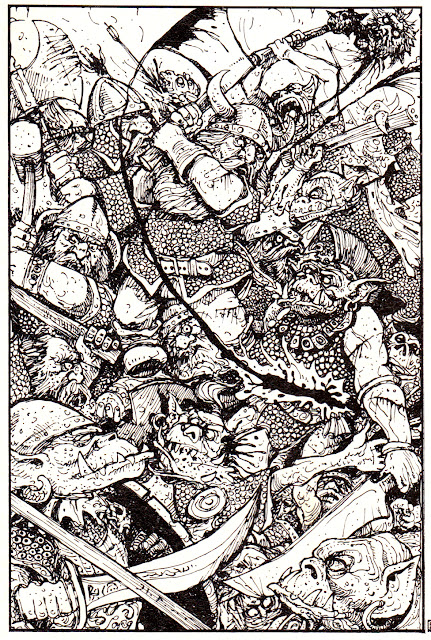 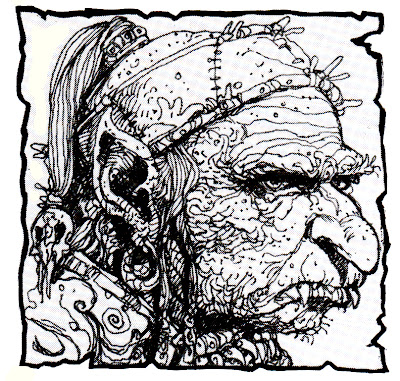 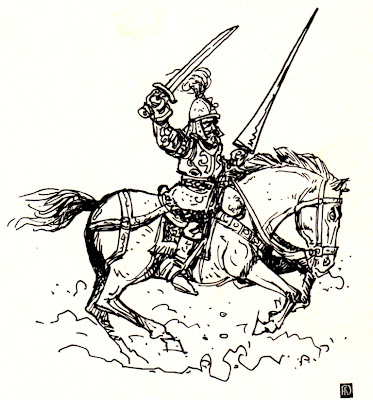 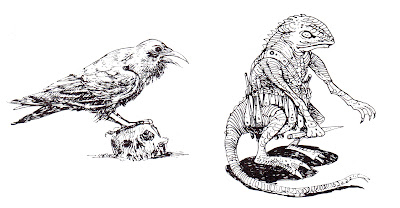 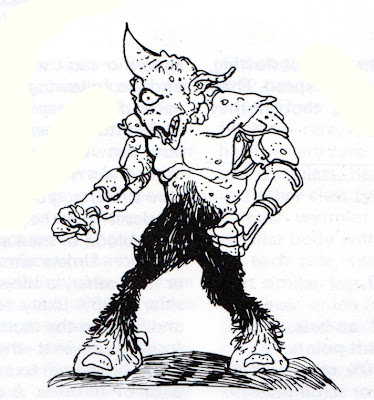 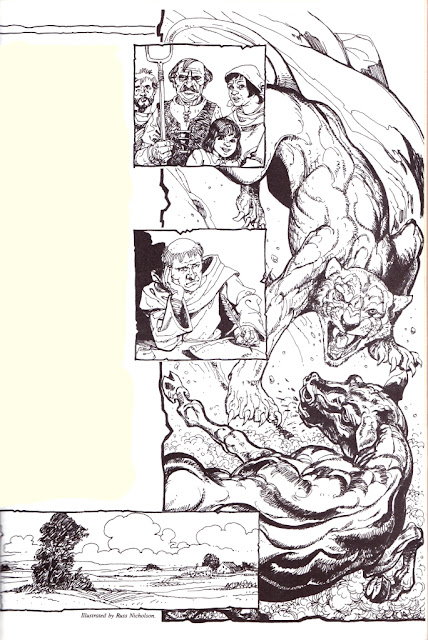 What about a couple more? 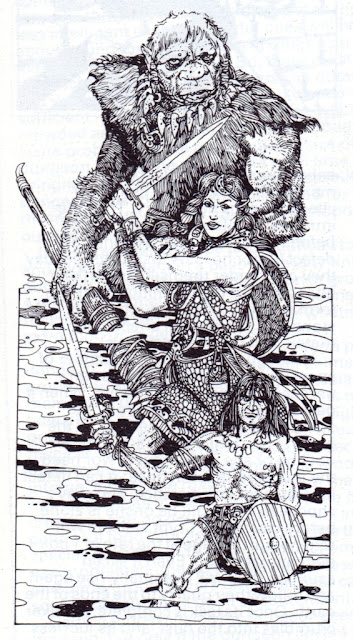 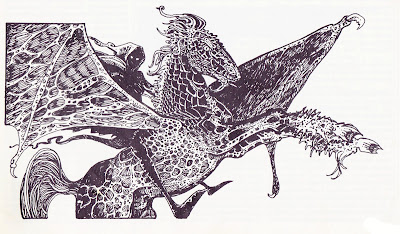 So that will do for now. Thank you again Andy ...you are a star! I need to return to the drawing board. However, back with more, if the Shadows hold of; or the frog that's hopping about my feet doesn't turn into a vampire, in just a few days.

Beware the Curse of the DSL ....it leads to gibbering time [eat your heart out Thing].
Posted by Russ Nicholson at Wednesday, August 17, 2011 6 comments:

How to rough it ... an example

Thanks to Atom, I'm going to post one of my rough sketches for an image I did for Le Grimoire's Lone Wolf .. http://www.legrimoire.net/images/russ-nicholson.htm though the rough went through various changes, including 'corrections' from the client it was actually completed using a graphic tablet.
Below is a copy of the final piece the original and the final piece used. 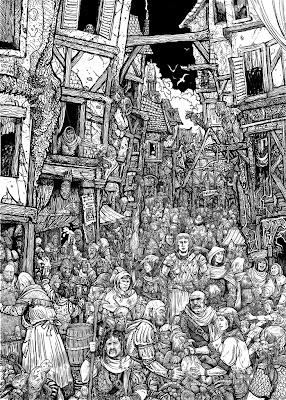 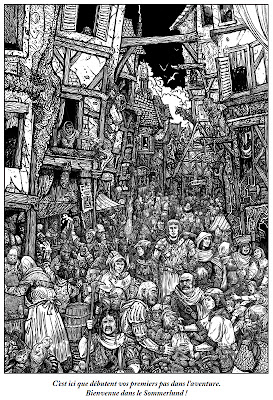 Other little jobs included this 'Kurtok', for New Zealand, and a few more Spurgers for Space madness. 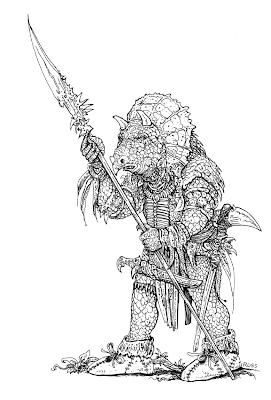 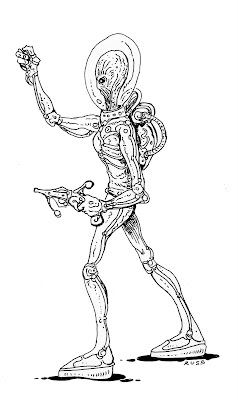 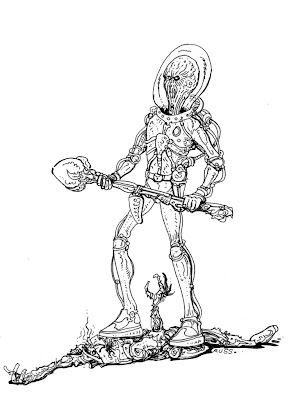 A harbour from ye old Fabled Lands ...and a Kabuki theatre. 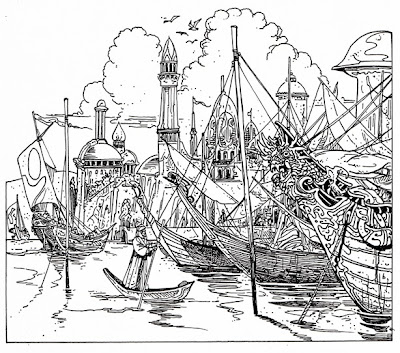 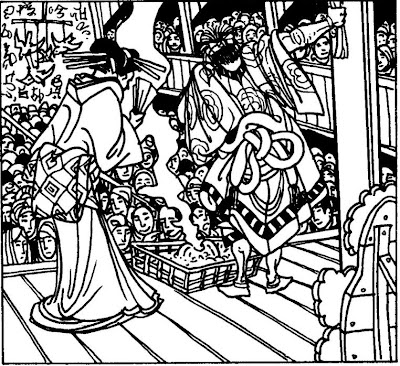 Now some real old pieces, that last appeared in the American fanzine, Copper Toadstool 5, published in 1979. 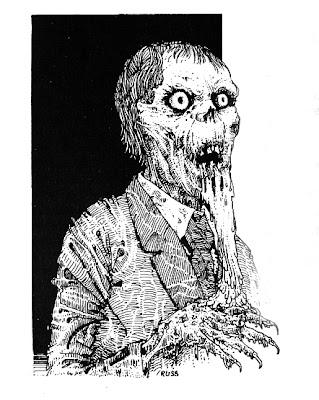 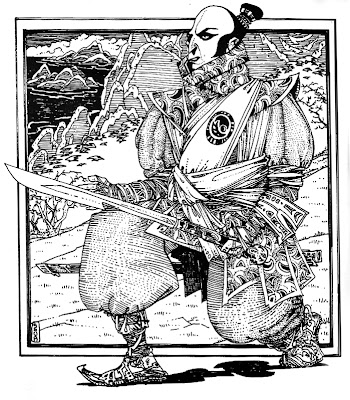 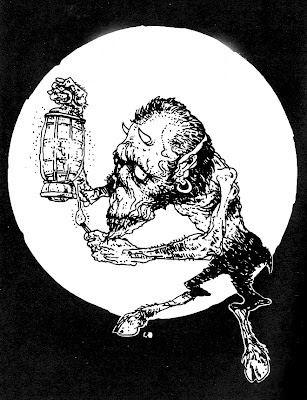 For those that missed it [cough] you'll also see I can now be found on facebook but don't expect anything to exciting. Blogs are it see....

Finally, a couple of Spacey bits to add to my space posts ... and to whet any appetites for such ... added again, because he wanted to see roughs. Though no claims the final work will be much of an improvement. lol 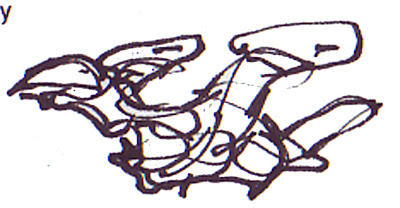 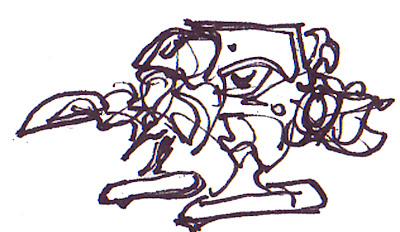 Till der next time .... before I moves to Gobsville [oooh, dats a secrets]. Don't sent roun' der bozys, please.

Addition ... Sebastien Boudaud, editor extraordinaire [Le Grimoire] , friend and other titles to numerous to mention, has kindly posted on facebook an interview I had at last years Monde de Jeu . Having listened to it after a year ... I realise it leaves a lot to be desired [cough] and memory is not my strong point as me ol' mother would say. But for those interested who have not heard it ....hear it is: http://www.scifi-universe.com/fiche_actu.asp?id=10234.

ALSO ... Do check out http://www.ancientblades.com/ where David Chandler has set up his own web page and which features the work I did for his Free City of Ness project.