Scene on the Road

First, a big thank you to all who have decided to follow my blog about my artwork.

I have 'cracked' the 100 followers, wow, and I feel like a jet pilot of yore when the sound barrier was first broken [little tear in eye!] a momentous event at the time.

What twaddle - I do however wish to commemorate the event in some way and have dug out a parcel of stuff for future posts, but in the interim  - I thought, what can I use to 'mark' the event [and my birthday]?


The following post is to mark that event and 'show' an example of work that I couldn't find a reason to post.
Many moons ago I was not only a fantasy artist, but a general commercial one, and worked on lots of stuff most of which is long forgotten. Among those 'jobs' was my being a comic artist in the UK, of which I'll soon post a couple of cobbled together photocopies of originals [as examples] for you to see. It's not exciting, but it will give a 'flavour' of the sort of work I did.

I also did work for the occasional magazine. One of these was a magazine called Penthouse, if you don't know what Penthouse was, or are under 16, please cover your ears now!

Donald McGill was for many years the 'King' of the British seaside 'saucy' [some might say vulgar] postcard, who was actually put on trial as a purveyor of pornography [in the early 1960's I believe]. Although he was prolific in his output I doubt he made any 'real' money from his work. There is a 'quality' about his work that says it was as much a labour of love, and I know from an Australian friend back in the 80's who thought he'd design some traditional cards for the South Pacific market that for each card he sold he would receive about 1.3 cents [and that's Australian dollars not American]. 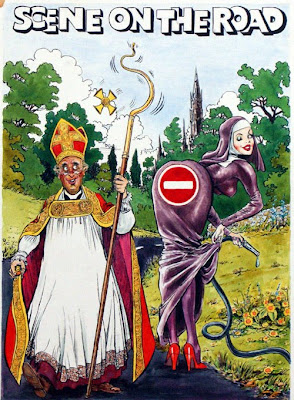 If anyone is interested in the work of Donald McGill I've made a link to an excellent article by George Orwell on the subject of McGill and his work http://www.netcharles.com/orwell/essays/donaldmcgill.htm [and hopefully got this right] .

For those interested, this is an example of Pen, Ink & Brush, coloured using Dr Martins concentrated watercolours.

That's all folks, till another day.
Posted by Russ Nicholson at Thursday, July 01, 2010