Even although the Fantasy Magazine Anduril 6 is dated 1975, I'm well aware, looking at several pieces of my artwork, kindly used by John Martin [editor and publisher], they in fact date much earlier [in some cases].

My work had appeared on some comic fanzines covers before this, but Anduril 6 was, I believe [but my memory can be suspect], my first Fantasy cover, certainly my first front and back cover. 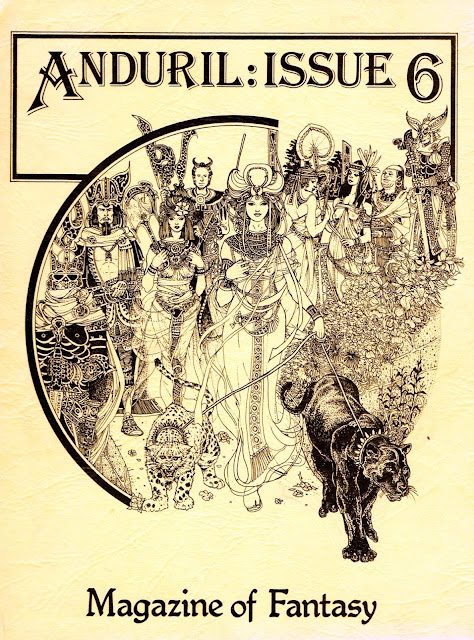 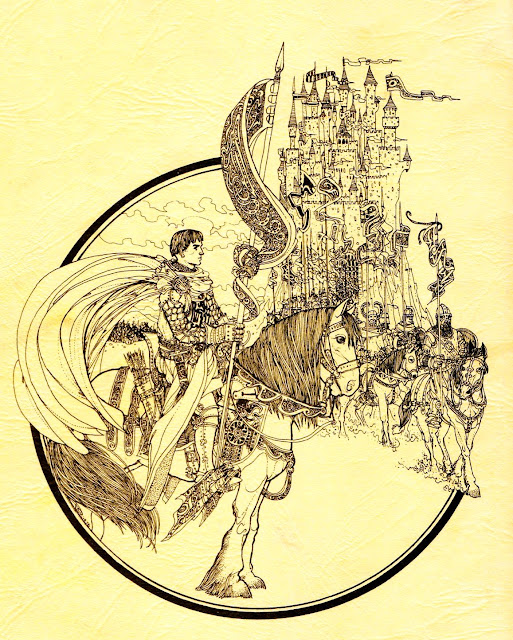 And also my last ... [laugh] for a variety of reasons.

One of the characterisatics of these pictures used in the magazine is a slight attempt to do varying styles; I've picked out the 'best' to show you here.

Inside the front cover illustrating a poem about Bilbo in Mirkwood we find a slightly different stylised piece. 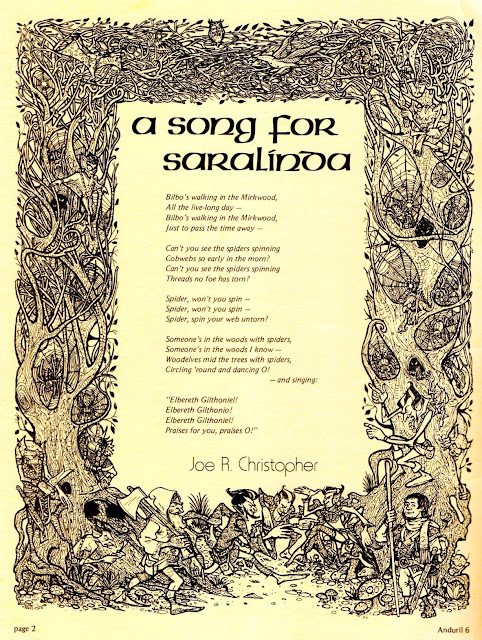 The next are two spots, I suspect the latter was originally a rough which I never 'tightened'. As some of you have suspected, even commented upon, on occasion I have, as many artists [if I'm allowed that conceit] have done, reused an idea. This is more apparent in my younger days and less [I hope] as I've aged [grin]. But if you disagree ... don't tell me; I'll just sulk. 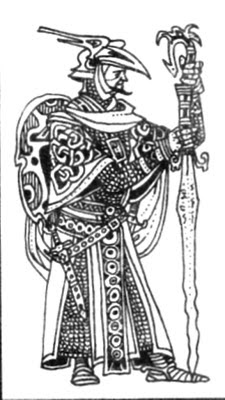 It was this type of work that failed miserably with publishers in the 1970's. It was considered to be derivative and not very original ... does wonders for your confidence, and was one of the reasons I decided to become a teacher.

The next are for a story featured in the magazine. 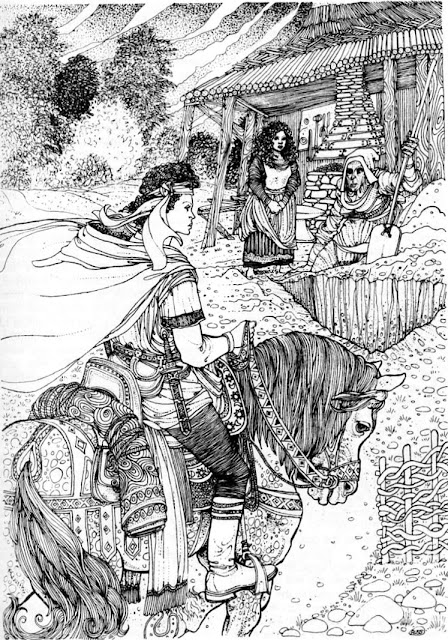 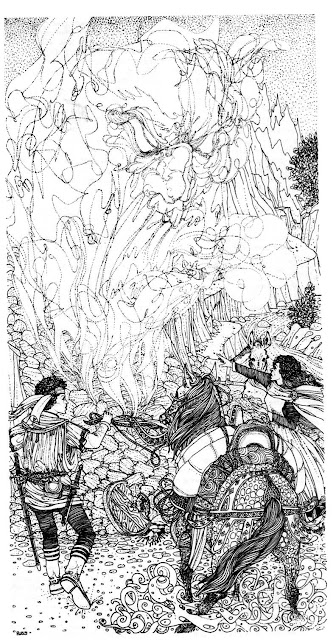 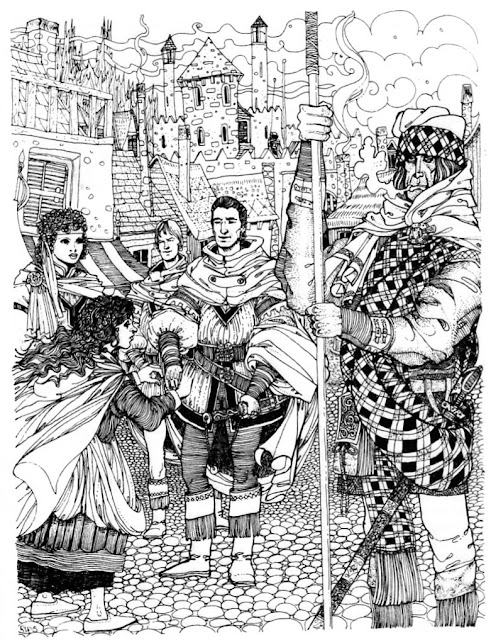 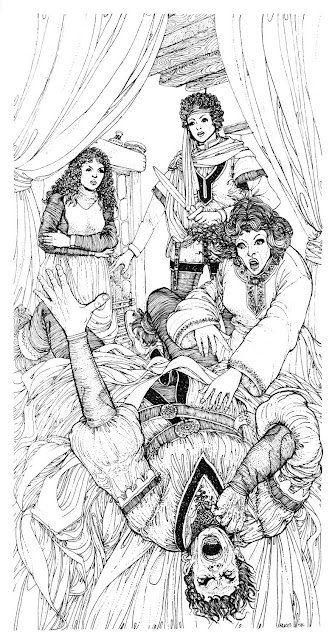 One of my favourite characters, whose stories I read in the 60's into the early 1970's, were the adventures of Fafhrd and the Grey Mouser by Fritz Leiber. Here is one of my pictures I used to illustrate an article about them. 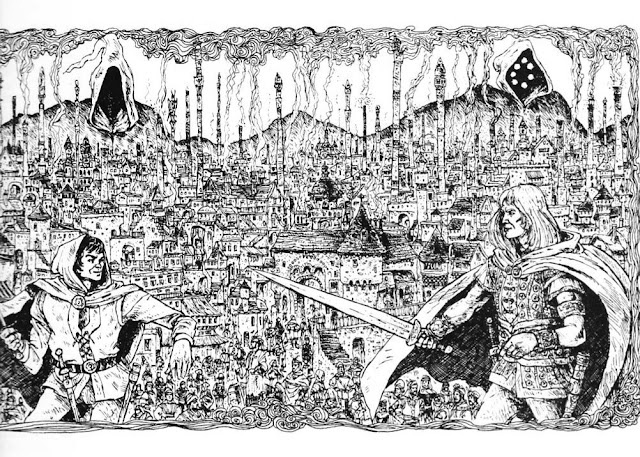 Lastly, her is an other set of pictures for a fun story which I was allowed to experiment with in terms of layout. 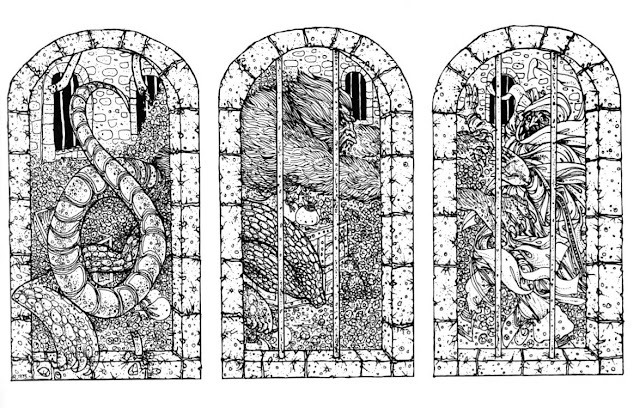 Before anyone asks .. I'm not sure where the originals are or even if I still have them.

So there we have it. What other news?

Finished my first record cover, which was most enjoyable. Still a couple of bits to complete for that project but it progresses well. Finished five pictures for a new Runequest project ... more detail when I can, and about to start some new jobs, including ... [sound of drums] a book cover. It has an open deadline so it may be a while before I can post more about it.

Thanks for being there.
Posted by Russ Nicholson at Tuesday, November 06, 2012