I've mentioned showing some very old work from the late 70's which I thought I had lost. The originals were ...... good question, but the answer is I have no idea, and although I thought all the prints long gone destroyed, when I had a partial roof collapse, which resulted in rain damage to a lot of stuff in a back room.

However, as mentioned, two examples of my version of trying to draw a set of pictures based on "The Hobbit" survive, even if in 'poor' condition, and as I keep on saying I will show them .... Well, here they are. Sadly the picture quality is also dreadful [don't ask it's cringe making to recount], but as it may be next month before I have the opportunity to re-shoot for better quality, thought it sensible to at least give you all an 'idea' of what they look like. But don't forget to squint, lean to the left, and try for a following wind to see them better.

The first is of Gandulf. 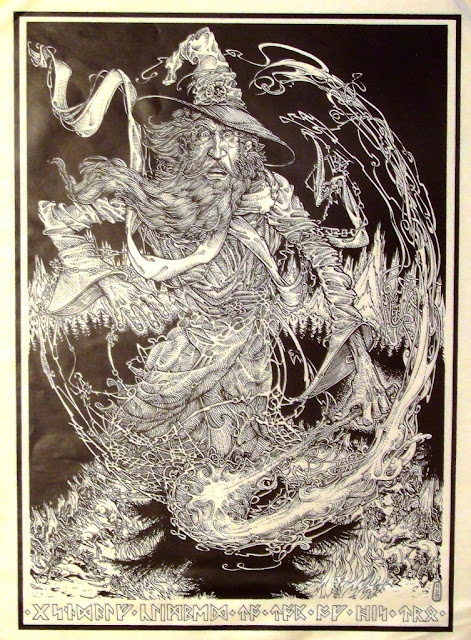 The second picture shows the first meeting of Bilbo and Gollum. 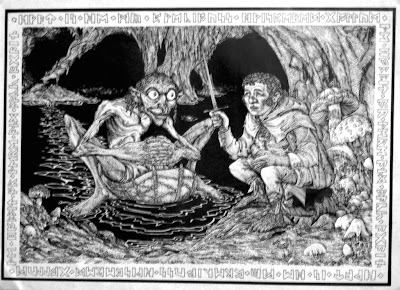 As I've 'said' these were originally drawn back in the mid to late '70's as part of a small series of A3 prints. The runic lettering is based on Tolkien's own and can, for those who want to, be translated. As can the lettering on my 'Dwarf-Land' map [see last post].

Finally, while working in Papua New Guinea in the early '80's I picked up a couple of commissions, and here below is one such example. 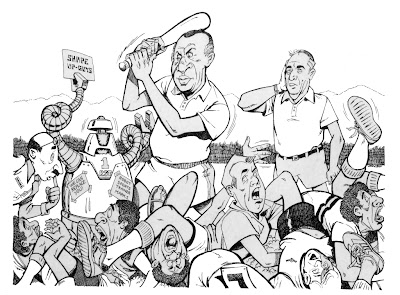 The subject, if memory serves, but I'm often told it doesn't, the subject was training for the local rugby club in Goroka, Eastern Highlands Province. To add explanation. In PNG rugby is played as 'touch' rugby only, This is because 'proper' rugby often resulted in torn ears and worse. I only ever witnessed one such game between our college students and an other college. It resulted in a mass pitch invasion, a riot , and we staff looking to round up our students many who had to go into hiding from the clamouring mob. Why all the fuss? Our college was winning.

Also, an end paper design from the 'latest' for Goodman Games to round up this short post. 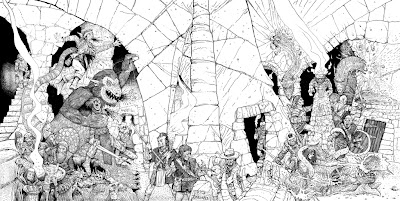 Next some more oldies from the 1970's. Do any of you remember a very good fan magazine called 'Anduril' ?.