The work inserted into this post is the result of two recent commissions - see bottom of post for more details.

I previously mentioned that I lost a particular post, one that I'd spent some time on when it 'disappeared'. Ah well, thus is life.

It had three purposes originally, first to reminisce about the gap in my period of working on the FF series. Secondly, to announce that I'm away in Paris next week appearing as a guest at a Games Convention 'Monde de jeu'. Thirdly, to reprint an email reply I made about the 'recording' of my appearance at said con. as I was informed it was worthy of 'broadcasting' I'm not so sure. Mmmmm. 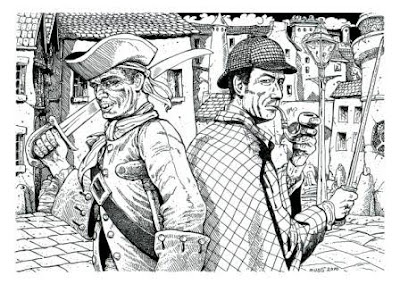 First. I had a very nice email from a fan reminiscing about his Fighting Fantasy collection. He said, "The first one I got was the Citadel of Chaos in the 1980s. Great book and your art really made it shine. I always liked the chaotic style of your fine-line drawings. Great stuff and a fond reminder of my childhood!" This in turn had me thinking about that period and the reason why after finishing book 2: Citadel of Chaos I never did another book until book 30: Chasms of Malice. Originally, in the 'lost' post, when I wrote about this period and being 'dumped' by Puffin I was full of ire [and malice


It came as no surprise to learn that other publishers were happy to receive work from abroad, and I learned on my return that a artists agent I had known had two artists working on the series soon after I left and they were earning twice the fee I had been. Useful things artists agents.

But there was, and is, an upside. I also learned years later from a teacher friend, when attending teachers conferences, that these first two books in particular, "Warlock" and "Citadel", had a profound effect in helping boys with reading and learning difficulties to engage in reading and the primary motivational 'trigger' was as a result of my drawings. 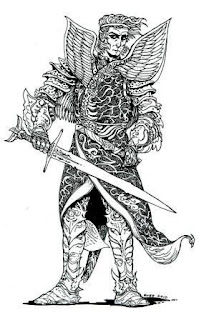 Second. I had intended to 'announce' this earlier but things have been a little hectic of late. I have been invited to be a guest at 'Monde de jeu' a Games Convention in Paris to be held next weekend. It should prove to be an interesting experience as I know no French. Anyway, this leads to the email I mentioned earlier.
Third. I've been doing a bit of work for Ramsey Dow at Calific and I wanted to add at least one picture to the PowerPoint presentation for which I was organising pictures that was from his new Fantasy Science adventure that he plans to launch shortly.
[See his blog  http://sicklypurpledeathray.blogspot.com  for more information.]
But when he heard I was to appear at this Convention he immediately thought of my presentation and discussion being recorded by video streaming then being 'posted'.
This was my sad reply which he thought both funny and worth posting, and so here it is.


I was concerned when I tried to leave my email on a site and it wasn't 'recognised ' and wondered if the email address was 'playing up' as one politely states on such occasions, and of course you are usually swift with your replies. Still, I hope the busy was a 'good' busy and not a 'bad' busy.

Now this message does so alarm me!!  Being recorded? Streaming video? Video file?
I'm the person who cannot even get a simple mobile phone to work properly. I managed once and then the phone just stopped and the local shop where I bought it was suddenly not there. So a few years went by and I bought another in a local supermarket, but made the mistake of not getting it operational there and then: so it still sits forlorn by my desk in bits
and some of the bits seem to have gone on walkabout. Most strange.

So asking such questions of me... Hell, they probably wont understand my accent. I used to have new students every year say, 'What's you sayin' sir?' Is that a' accent, sir? Is dusz yuz Scottish, sir?' The playful little monks couldn't even say 'scots' not 'scottish'. I'm not a marmalade, for heavens sake! Ah, the sweet memories.


MM this might appear on my blog - or is that too sad git :)


OK - this techno Q. I'll ask if it is happening? Why do you want to hear me rabbit?  As an ex mature student said to me today with a grin, and I'll shorten her reply, " PowerPoint presentation? Can you handle that? Succinct was never your strong point." Bah, who invented students?

So there you have it except to mention a couple of new commissions. The 'originals' have been inserted into the post elsewhere as you will have seen.
First for Kobold Quarterly Magazine [ http://www.koboldquarterly.com/ ] and second for  Scott Driver [see his blog  http://hugeruinedpile.blogspot.com/ ].
Next post will be after my return from Paris. Is it me or I the only one who hates organising trips and thinking of a all the things that can go wrong?
Posted by Russ Nicholson at Friday, September 03, 2010